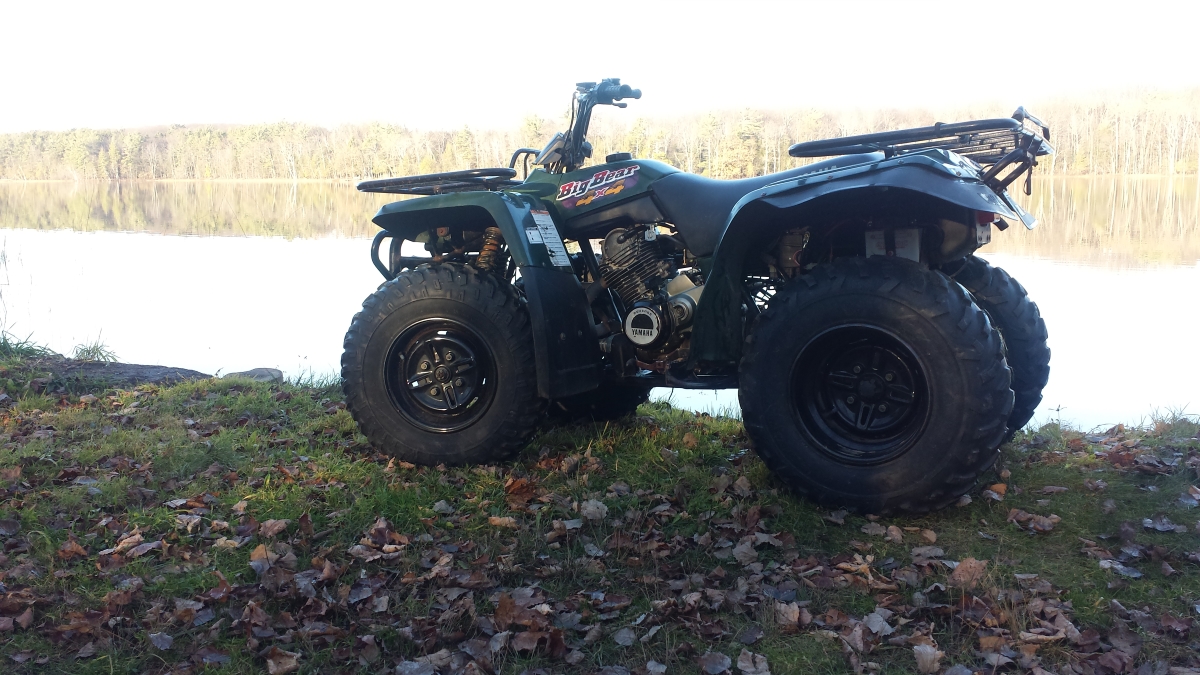 Today was a perfect day to work outdoors.  Temps were in the high 50s, the air was calm, and the sun was bright.  The unseasonably warm weather was also perfect for working on the Yamaha Big Bear.

Yesterday I mounted the rebuilt engine into the frame and reconnected the back axle and drive shaft.  The original starter cable was broken, so I took a quick trip to Kalkaska and bought a generic automotive-style ground cable to use as a replacement.  It was the same length and worked perfectly.  After cleaning the electrical connections I tested the ignition for spark.  I could see tiny sparks as I cranked the engine.  I added some gasoline to the newly-cleaned fuel tank.  I switched on the fuel petcock and the carburetor filled with gas.  I pulled the choke out, turned the key and pressed the starter button.  I was pleasantly surprised when the engine roared to life after just 1-2 seconds of cranking.  I also tested the pull starter, which worked very well too, starting the engine again with a single pull.

I pushed the ATV onto the lawn and started it again.  I put it into first gear, thumbed the throttle, and the engine revved but the machine didn’t budge.  I was able to shift up and down, but there was no forward motion.  Darn.  I drained the oil and pulled the right side cover to examine the pair of clutches.  I removed the bolts holding the clutch pressure plate in place, and could sense that the clutch was disengaged.  It appeared that there was nothing wrong other than the clutch adjustment.  I thought I had adjusted the clutch properly a few times, but something must have hung-up inside.  I manually actuated the clutch rod inside the engine and it appeared to be working well.  I reassembled the clutch and could tell that it was now engaged, holding the clutch plates tight.  I closed up the engine and refilled the engine with oil.

That was all it needed.  I restarted the engine, stepped into first gear, thumbed the throttle, and the Big Bear lurched forward.  I drove across the street, around some trees, and back home again, with Enzo chasing me the whole way.  I spent the remainder of the afternoon adjusting the brakes and installing the body panels.  Tomorrow I’ll change the gear lube in the front and rear axles, and it’ll be ready to hand back to Ken.  It’s not perfect.  I never did find a replacement muffler, so it’s louder than it should be, but it’s running again.