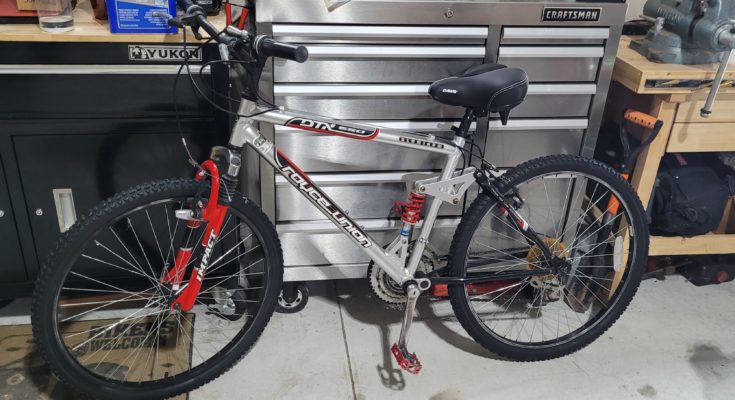 Recently, an abandoned men’s mountain bike found its way into my garage. It didn’t cost me anything, and it looked interesting, so I decided to take on the project. This mountain bike could be useful during my metal detecting outings in the woods, or simply for some exercise around the neighborhood.

When I picked up the bike, it was missing a seat, so I ordered a nice gel-filled saddle that would be comfortable and look nice too. That was the easy part. I could see that this bike spent some time outdoors, so there was some light rust on the cables and a few screws. I decided to do some research and learn more about this machine.

It’s a Royce Union brand bicycle, which to me, meant nothing. From what I could tell, these machines have been built all over the world, but today are mainly products of Asia. On the plus side, it had an aluminum frame, aluminum wheel rims and both front and rear suspension. It seemed to be a decent enough machine for my occasional use. It has a 21-speed Shimano derailleur, so there will be more sprocket ratios than I’ll ever truly need. The most obvious issue, aside from a missing seat, was that the tires were flat and and were wobbly on the axles. I could see that the derailleur and brake cables would require lubrication, but that’s easy work. I fired up the compressor and filled the tires, which to my surprise, did not leak. The tires seemed like new, too. I had to lean it against the tool chest since it lacked a kick stand.

The rear wheel came off easily enough, but I could sense that the bearings were crunched inside. Once the axle was removed, the bearing cage was visibly distorted and the 7 ball bearings had become loose. I then noticed that the bearing race was seriously damaged, so this bike experienced some abuse at some point in its past. Perhaps the rear axle bearings were over-tightened? I’ll never know for sure, but I needed to order some parts.

When ordering the bearings, the most common style seemed to have 1/4″ balls, but other sizes were available, too. My digital calipers were at the cottage, so I used an old-school micrometer to confirm the size of the loose ball bearings. Exactly .250 inches, confirmed.

This rear axle is the older freewheeling style, and has an internal spline that requires a special tool to remove. Fortunately, the special tool with shipping was only $10.54, so that was added to the parts list. A new rear axle with new nuts, dust seals and bearing races was $16.95. A pair of new bearings was $12.70. The price of the seat plus shipping was $48.75. At this point, the “free” bike has cost me $88.94, but is worth fixing.

Hopefully the rear wheel issues will be the end of the problems. I’ll post an update once the parts arrive and I’m able to install them. Wish me luck.