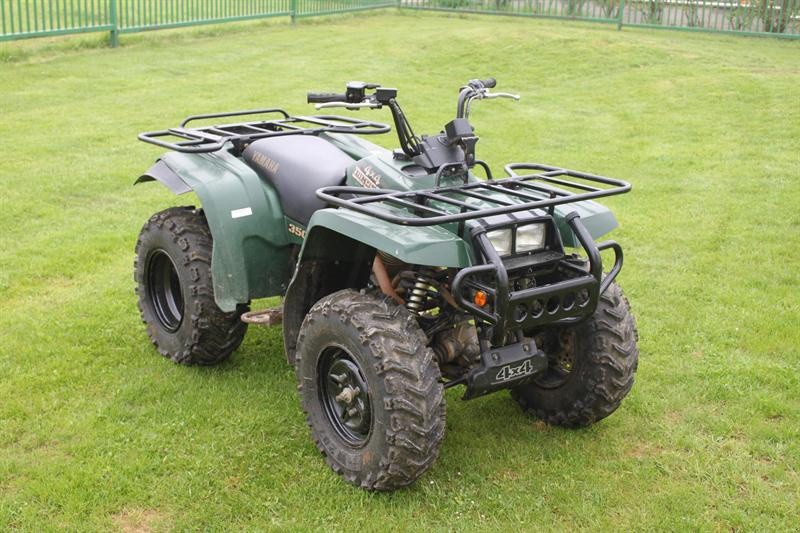 While visiting Sherry and Ken last month, I asked Ken about his ’99 Yamaha Big Bear 4×4.  It had been parked outside his shed for a long time, so I was curious.  He replied that the engine was shot, and that the guys at the Yamaha shop said that the parts needed were no longer available.  He also mentioned that he just might “part it out”, selling the individual parts online.  I was curious about the engine, and asked Ken if I could have a shot at fixing it.  Since it was already not running, I couldn’t make it any worse, right?  Yesterday I started the tear-down on the Big Bear.

The Yamaha Big Bear was a utility ATV that was sold in both 2 wheel drive and 4 wheel drive configurations.  Ken’s machine has a 348cc single-cylinder engine – small by today’s standards, as Yamaha’s smallest ATV, the Grizzly, comes with a 708cc engine.  After some research, I learned that the Yamaha dealer was right – many parts for Ken’s engine are hard to find.  The 2WD version was more common, and Ken’s engine configuration was made for only a few model years.  Wonderful.

I pulled the right side engine cover to inspect the clutches and look for signs of a problem.  This machine has a pair of clutches – a wet clutch like a traditional motorcycle, and a centrifugal clutch mounted on the crankshaft.  That centrifugal clutch allows the bike to start and stop from any gear, and to allow the engine to idle without pulling in the clutch lever.  The clutches looked clean, with no debris or signs of failure.  I moved to the left side of the engine.

On the left side of the engine I noticed that only 2 screws held the engine cover on.  I should have noticed that earlier, as the rest of the screws were in a bag that the dealer gave to Ken.  The dealer put just enough screws back in place to hold the cover on.  I pulled these screws and removed the left engine cover.  The issue was plainly evident.  The starter idler gear mount had broken away from the crankcase casting.  In addition, the crankshaft was stuck as if the engine had seized.  I found a rogue bearing jammed between the alternator rotor and the crankcase.  Once the bearing was removed, the crankshaft rotated nicely.  Regardless, the broken mount meant that the engine crankcase would have to be replaced – probably the largest component of the engine.  Given the relative rarity of Ken’s engine configuration, I wondered if I could even find a used crankcase.

The best source for old engine parts is eBay.  eBay provides a global source for parts at great prices.  I was quickly able to find available crankcases for the older Yamaha Big Bear models, and for the 1999 model year, plenty of 2WD crankcases.  After more online hunting, I found 2 available crankcases that matched Ken’s engine, one from a seller in Michigan.  After comparing pictures and part numbers, I purchased the part.  That’s the good news.  The bad news is that I’ll need to do a complete engine rebuild to install it.

I’m looking forward to the rebuild.  Until the new parts arrive, I’ll be removing the rear axle and drive shaft to prepare for the removal of the engine.  I’ll post updates here as parts arrive and I make progress.  Wish me luck!