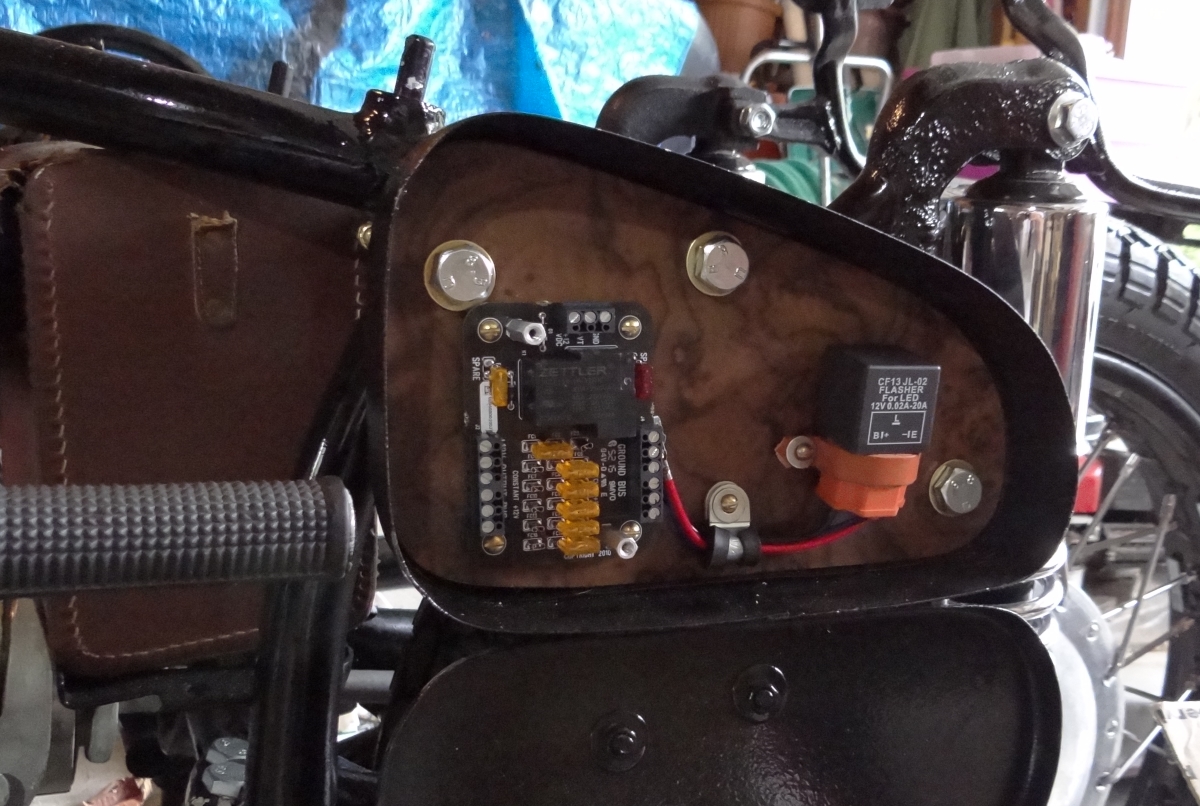 When I started the Dnepr MT-11 rebuild project, I decided early on that I would conceal the electrical components that were originally exposed to the elements.  Not only did their original placement allow corrosion and dirt to accumulate, but the electrical parts and related wiring were ugly to look at.  To house all electrical components in a tidy manner, I purchased some aftermarket metal motorcycle toolboxes that would fit the Dnepr’s frame.  These toolboxes are similar to those that hung from the sides of bikes in the ’30s and ’40s.

Since the Dnepr didn’t originally come with metal toolboxes, there were no existing mounting points on the frame.  After some searching I decided to use brass plated copper Munsen rings, which are designed to suspend pipes from above.  The Munsen rings were available in the diameter I needed, and the brass looked great against the black painted frame.  Since the base metal was copper, the rings should flex as needed under stress and not crack.  Besides, the toolboxes were not heavy.

To mount the electrical components inside the toolboxes, I planned to use 1/4″ plywood.  I could have simply painted the plywood, but in a case of overkill, I naturally chose walnut burl veneer to cover the plywood.  The veneer was inexpensive and readily available, and while nobody would see it unless the toolboxes were open, I thought it would add a classy touch to the project.

I used a contact adhesive to glue the veneers to the plywood.  Once the panels were cut out, I lightly sanded the veneers before spraying a satin polyurethane on all sides to seal the wood and bring out the beauty of the burled grain.  The location of the toolboxes couldn’t have been better, too – right next to the battery box.  Therefore, most wiring will be completely concealed from view – a big improvement over the original Dnepr design.  The left toolbox would contain a new switched fuse panel, electronic turn signal flasher for the LED signals, and the master battery toggle switch that previously hung below the rider’s seat.  The right toolbox would house the voltage regulator, rear brake switch, and another toggle I added that would allow the right turn signals to be switched between the motorcycle and sidecar in the unlikely event I ever opt to ride the motorcycle without the sidecar.

I’m pleased with the appearance and functionality of the toolboxes.  While I won’t be doing any intentional foul weather riding, the electrical components will be shielded from weather and dirt, and there will be no ugly exposed wiring.  I still need to mount the rear fender lights before I begin creating the custom wiring harness.  I should make more progress at the end of May.  Stay tuned.