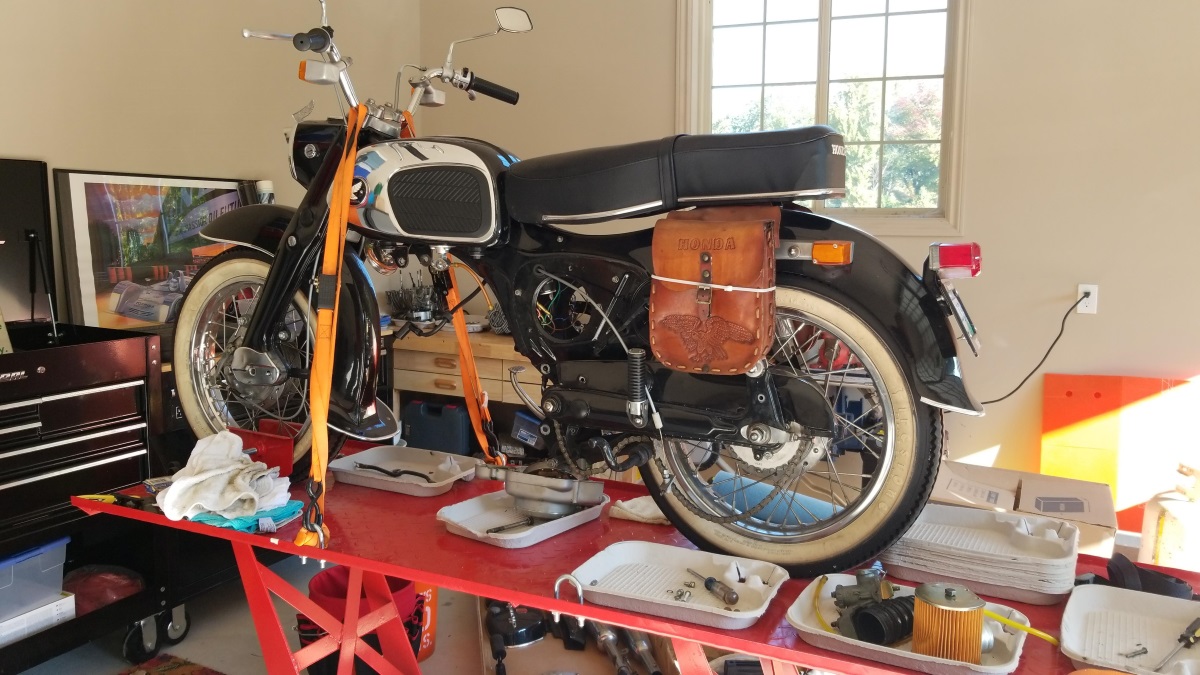 The little 1965 Honda CA95 Benly in the garage needs a bit of work again.  The kick-starter stopped engaging the transmission shaft, which has happened before.  The Benly also has an electric starter, but since I wasn’t sure what the cause of the kick-starter problem was, I didn’t want to take a chance of having some little metal piece getting into the gears.  The engine had to be removed and taken apart – again.

This problem happened before, in 2014, when the kick-starter ratchet spring became disengaged.  To keep the disobedient spring arm in the little hole, I used a high-temperature epoxy.  That seemed to work for a few years, but again in 2016 the kick-starter stopped engaging.  With other motorbike projects underway, the Benly had to wait its turn for repairs.

Today I pulled the engine apart.  Once again, I could see that the little spring worked its way off the kick-starter ratchet pawl.  The epoxy was still in place, but somehow the spring leg wiggled away from the hole.  I drilled out the epoxy and will consider other solutions.  At this point I’m thinking that using stainless steel safety wire wrapped around the ratchet pawl will retain the spring.  Since the safety wire is at the Alden house, I’ll have a week to think about it.

Since we’re nearing the end of riding season here in Michigan, I’ll use the Winter to make a few other improvements to the Benly.  I’ll switch to LED light bulbs for the turn signals and an electronic flasher.  This will work more reliably than the incandescent bulbs, especially with the 6 volt electrical system.  I want to be riding the little beast again when Spring arrives.