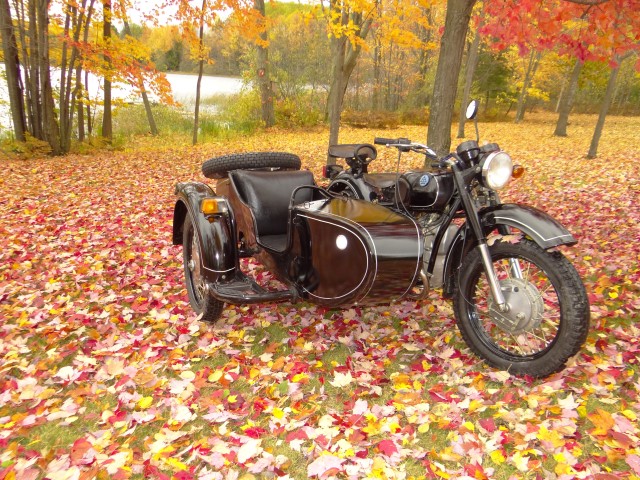 On July 28, Mary Jean sent me a text message with a picture, telling me that Graham just bought a Dnepr for his next project.  I had never heard of a Dnepr, but the motorcycle-sidecar combination looked a lot like a Ural combo to me.  Curious about what a Dnepr was, I did some quick Internet research and learned that this bike was indeed a cousin to Ural, with both being Soviet Union-era descendants of the 1938 BMW R71.  My interest was piqued.  A Russian coworker helped me with the pronunciation – you’ll be close enough if you just say “nipper”.

Graham’s Dnepr had a whopping 23 kilometers, or 14 miles, on the odometer.  In spite of being relatively unused, the bike was in need of repair from sitting idle.  He ordered parts from Ukraine, patiently waiting as hostilities in the area delayed shipments.  He replaced fuel lines, cleaned and rebuilt the carburetors, replaced the tire inner tubes, and did countless other tweaks and adjustments.  Last weekend it was ready, and I hauled it to Alden on October 17.  The next day I took the inaugural ride to Sherry and Ken’s place, and took mom for a ride on Sunday.

The first question I get from people is “what year is it?”  Honestly, It’s hard to say how old this Dnepr is.  When the Soviet Union collapsed in 1991, Ukraine declared its independence, and the Dnepr plant in Kiev lost much of its government funding.  A handful of employees briefly kept the Dnepr alive after the assembly line conveyors ceased operating and aged tooling broke down.  Motorcycles were hand assembled, and in many cases, parts were packed into crates for sale as complete kits to customers overseas.  This is how this Dnepr began life – as a kit shipped to the US.  Dnepr production ended several years ago, but a strong aftermarket exists to keep these machines running.

I certainly didn’t need another motorcycle, but this machine just oozed character, and seemed to be a perfect fit for the casual pace up north.  It’s like riding a little Jeep.  It climbs hills, handles dirt roads and trails with ease, and should be fine for trips to Alden on snowy days.  It looks and sounds like something from another era, and I get a lot of curious looks and waves as I ride it.  Thanks again, Graham!

’71 Shasta Camper for Sherry and Ken