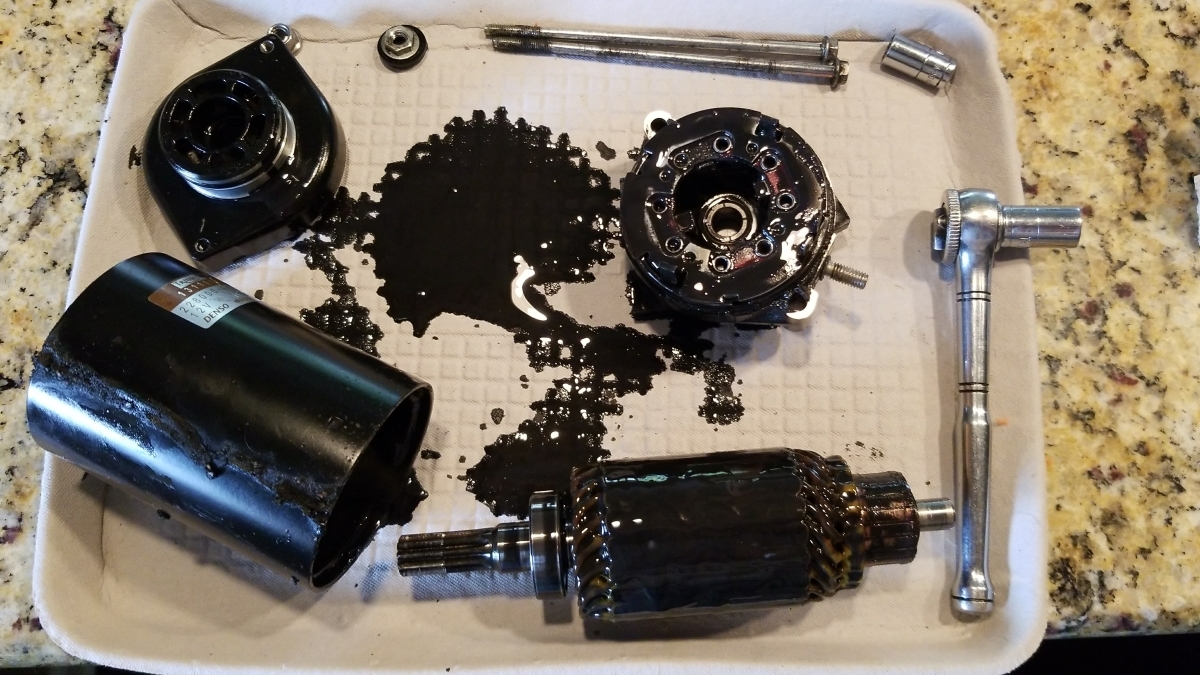 When the starter failed on my 2014 Triumph Bonneville T100 after only 6700 miles, I searched online for a new replacement.  The part is made by Denso and is similar to many new motorcycle starters priced under $100.  After seeing some Triumph dealers listing the part for over $900, a completely ridiculous price, I picked up a used one on eBay for $90.  Given the high prices for these starters, I decided to disassemble the original starter to determine what failed and whether it could be rebuilt and put on the shelf.  The video below shows my failed starter, which could barely spin and sounded like a steam engine.

When I remove the two screws holding the starter together, smelly black oil poured out.  That wasn’t a good sign.  The starter mounts directly the the Triumph engine, which itself has oil inside.  To keep the oil inside the engine, there are two seals.  The first is a simple O-ring around the starter flange, but since oil wasn’t seeping onto the ground, that O-ring performed as expected.  The second is a shaft seal that prevents the engine oil from entering the starter.  Apparently oil got past this seal, but why?  There could be a few possibilities, such as seal failure, damage to the starter shaft, a failed bearing, or excessive crankcase pressure.  Regardless, this inexpensive seal, and the exterior O-ring, will be replaced.

The good news is that the armature tested good – no open or shorted circuits.  The brushes are also in good condition – not surprising given the low mileage of the motorcycle.  I’ll order a new seal and O-ring then put the starter back together and test it.  If it passes the test, it will go on the shelf as a spare part.