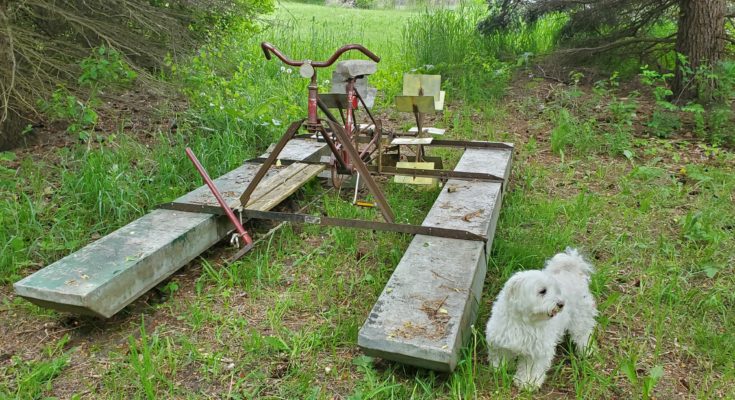 Earlier in the year, my coworker John told me about a small abandoned boat on his wooded property. He had recently moved to the house and discovered the boat during a walk, along with other junk, dumped in the woods. A neighbor mentioned to John that the boat had been there, to the best of his recollection, since at least the mid 1970s. John described the boat as having a bicycle frame in the center, which immediately reminded me of the pair of paddle boats my grandparents had when I was young. John sent me a photo of the boat, which appeared to be similar to the boats we peddled around Island Lake in Rose City, Michigan, in the late 1960s. There was no doubt that John’s boat needed a complete overhaul before it could be used again, but I thought that sounded like a fun project.

On May 13 I stopped at my mom’s for a carry-out dinner from Short’s Brewing Company. She shared with me a photo of her mother on one of those paddle boats in 1968. This photo brought back many memories of summers spent at the lake. Trips to the log cabin were among my fondest childhood memories.

On May 28 I stopped at John’s house with a trailer. I walked into the woods where he pointed, and I found the boat next to an old wheelbarrow and a pile of broken concrete. I was in shorts and the boat was surrounded by poison ivy – wonderful. I found that the boat was not heavy, so I dragged it into a clearing for inspection. It was rough, but in better condition than I had expected. Still, I knew it was dumped for a reason. I noticed that the steering linkage had broken away from the bicycle “fork”. I lifted the boat and noticed a gouge in the front of the right aluminum pontoon. That was likely the reason it was discarded. Still, this appeared to be repairable, so I dragged the boat to the trailer for a ride to its new home.

The boat’s frame was made from simple steel angle bar, which only had light surface corrosion. The pontoons are aluminum, although crudely made. Each pontoon is held to the frame by three stainless steel bands, which were in good condition. The paddle blades are also aluminum, riveted to steel arms. At some point in its life, somebody painted the frame, pontoons and paddles. Most of the paint has flaked away.

This boat’s construction was more like a hand-made prototype than a series production design. The only hint at its origin was a metal plate riveted to the front frame bar that read “Horst Manufacturing Company, Belleville, Michigan”. I couldn’t find any information about this company, so John did some research using a subscription-based newspaper search. He found two old newspaper clippings that mentioned the company. One was a brief mention of Horst Manufacturing Company as a sponsor for an ad in 1951, which also stated that the company was established in 1933. The other was a more ominous classified ad from November 4, 1984, listing the liquidation of the company’s assets.

Through some additional research I found several newspaper advertisements for this exact product, dating from 1955 to 1960. This was a Horst Waterbike, and it was at least 60 years old.

On May 30, I used an angle grinder to cut away the bolts and disassemble the boat. I’ll replace any fasteners with stainless steel. The chain will be replaced with new. I will have to replace the bicycle fork, but it uses a standard piece so that should be easy. The steering linkages and tie rod may be replaced, too, using newer hardware. The aluminum pontoons and paddles will be cleaned, repaired and polished.

I will look for a local shop that does aluminum pontoon repair to fix the damaged pontoon. I’d like this work to be done professionally. I’ll handle the rest of the project myself.

If all goes as planned, the Waterbike will be reborn and see service on our little lake this summer.