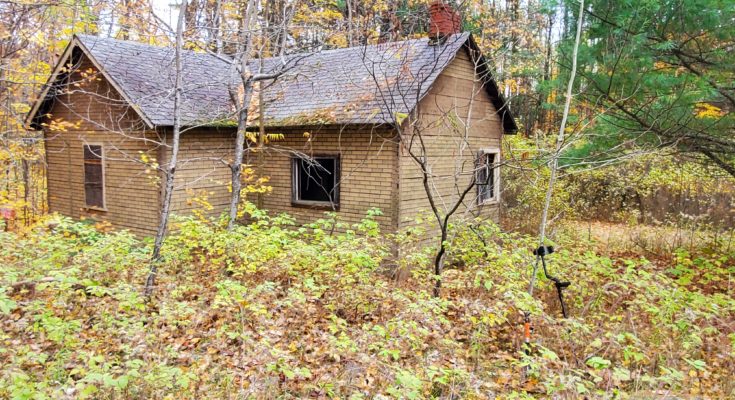 Today was chilly, overcast and occasionally rainy, so naturally I decided to spend some time outdoors. Ryan had stumbled on an abandoned house a few months ago while hiking. Yesterday, Nicki, Anthony and I took the same route and found the house. With the location nailed down, I decided to do some metal detecting.

The house was more like a hunting cabin, with just few rooms and an outhouse. It was cheaply built, with 2×4 construction and asphalt “brick” roll siding, suggesting that the house dates to the 1940s – 1950s. The house’s foundation was made of field stone.

Sites like this tend to accumulate junk that others dump over the years, and this was no exception. Visible behind the house was a discarded metal bucket and remnants of a car muffler. Close to the house, the metal detector beeped constantly due to the amount of discarded garbage just below the surface.

Among the treasures unearthed were an ax head, sardine can, pull tab, nail, some aluminum pieces, a bullet casing, a shotgun shell, and broken pieces of window glass. Nothing interesting and no coins. I’ll likely return to the site for a second try.