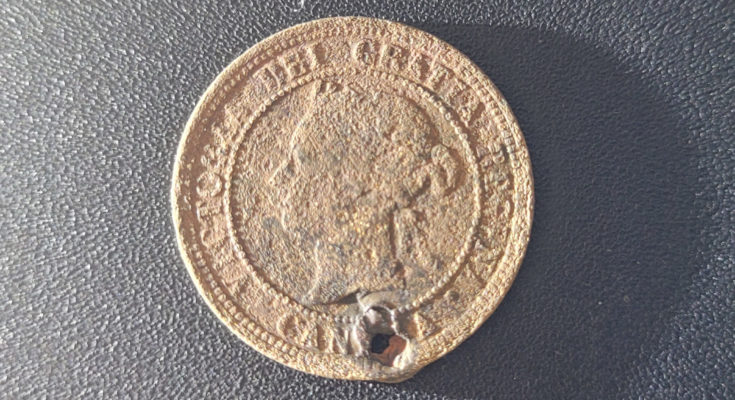 Yesterday I had the pleasure of visiting my brother Daryl for food, family and fun. I brought my metal detector along, not really expecting to use it but to have it in case he wanted to do some quick detecting in his back property.

After a few people asked me about my metal detecting hobby, I grabbed the detector and headed into Daryl’s mosquito-infested backyard. Daryl and I had hunted back there a year ago, with relatively few coins found. This time I got a coin signal within the first 2 minutes. A large copper coin was in the hole, so I immediately suspected that it was a large cent. It certainly was, but what I was not expecting to find was a Canadian large cent.

Like many coins from the 18th and 19th century, this coin has a hole in it. People would sometimes tie their coins to a string to make it more difficult to lose one, or would add them to a necklace or bracelet as a charm. Given the size of the large cent, this was probably tied to a string at some point.

The coin’s condition illustrates how copper can age poorly in contact with moisture. While silver coins like older dimes and quarters often age well, copper oxidizes and degrades more rapidly, depending on soil conditions. At least I was able to identify this coin and get a year from it.

While not in good condition, it was nice to finally get my first 1800s coin with a metal detector. Looking forward to my next coin hunt with Daryl.