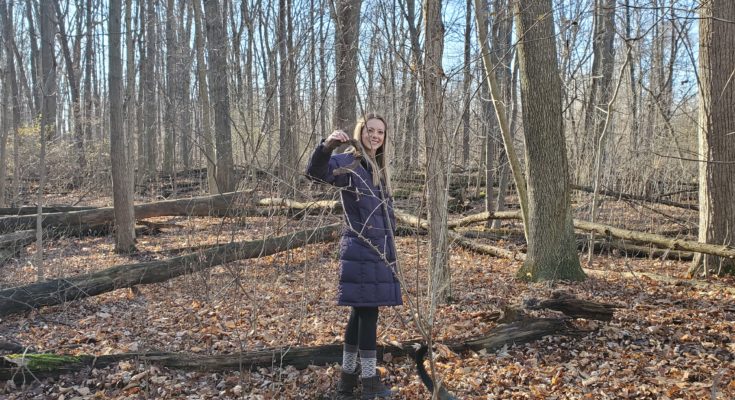 Since we moved in to the new house a few years ago, I’ve been interested in learning more about the 33 acres of woods behind the house. I assumed that the woods were always woods that somehow escaped development, but a map from 1875 showed that this was all once farm land. The map also identified a homestead nearby. On November 20, I decided to take the metal detector around that area, which is heavily wooded today. I quickly found a large old horse shoe, and absent-mindedly left it on a log. I was not able to find it a few days after, but today, 8 days after the horse shoe was unearthed, Nicki found it, still resting on a log. The metal detector also found a second, smaller horse shoe today.

My neighbor’s elderly father was visiting them today. He’s a farmer and grew up farming. He quickly identified the larger shoe as a rear hoof shoe, likely from a draft horse that once worked the farm land. Therefore, the smaller shoe was likely from a front hoof. Both shoes are heavily rusted, but I’ll use electrolysis to remove the rust to make them more presentable.

When I found the larger shoe 8 days ago, I ran into another metal detectorist who had found a US cent from 1842 nearby. With December fast approaching, the ground will soon be frozen. At least this time I will be better prepared for the next season, and I’m now familiar with that location in the woods where once stood 6 tiny buildings, possibly a stable. It will be fun to explore that location again.