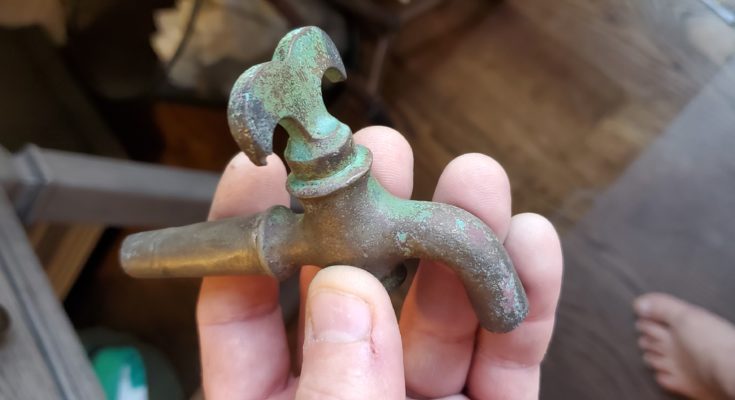 As March brought some warmer weather, I had an opportunity to do some metal detecting in the woods. I gathered my gear on March 20 and hiked half a mile through the woods to the site of an 1875 homestead. It was at this site where I had unearthed 3 horseshoes a few months earlier. Once again, I failed to find any pots of gold or even an old coin, but I managed to acquire a solid case of poison ivy. It wasn’t a total waste, however, because I did find a few interesting artifacts.

The first item was interesting because it wasn’t made of iron. Nearly everything I find at this location is iron-based, encrusted in thick rust. I recognized it immediately as a brass barrel tap. These taps had a tapered neck that would be pushed into an oak barrel, creating a spigot of goodness – assuming the barrel had beer or whiskey in it. This is one of my favorite finds so far.

Another item I was able to identify was an iron buckle. Buckles like this were used with horse tack – the leather straps, saddles, and bridles used with horses. Like the horseshoes found previously in this area, this buckle likely dates from the mid to late 1800s. It took 10 days of electrolysis to remove the rust from the buckle. After the electrolysis, I preserved the buckle with Renaissance Wax to prevent future corrosion. The buckle’s tongue remained frozen in place, which is fine. I didn’t want to risk breaking the now-brittle iron by applying too much pressure.

I also found an ancient wood splitting wedge during the same outing. It was similarly encrusted with thick rust, but was otherwise similar to wedges sold today, so I opted to discard it in the recycle bin. I tend to dig about 95% junk, and the picture below illustrates the total haul. The tap, buckle and wedge are at the lower-right, and in the tray at the upper right, you’ll see a pocket watch bezel, likely of brass. I haven’t decided whether I’ll clean and save this or simply discard it. I also found the typical handful of old shotgun shells, aluminum and steel beverage cans, and unidentified scrap iron or steel. I always take the junk with me, leaving the ground cleaner than how I found it. Maybe next time I’ll find that pot of gold.