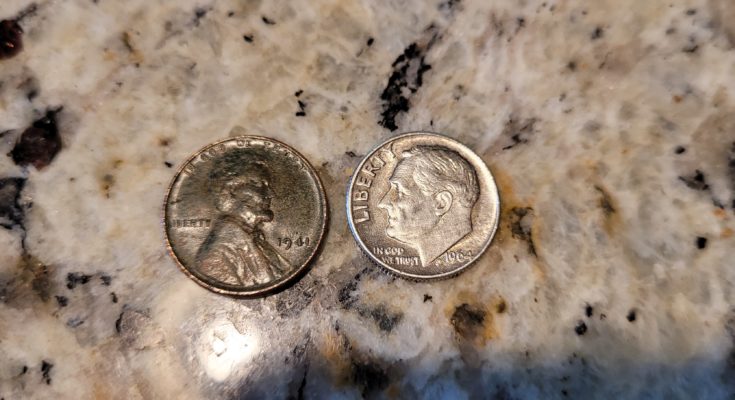 With a few hours to spare before the storms arrived, I took the metal detector into the woods behind the house for a quick hunt. The new XP Deus 2 detector has been impressive, and the custom program I created helps me ignore the iron and steel signals and focus on higher conductivity coin metals like silver and copper. Unfortunately, aluminum is a high conductor too, so I’ll always have that to contend with.

Since brass shotgun shells appear similar to copper coins to the detector, I always seem to find a dozen of them. Today was no exception, with 17 old shotgun shell casings found in the short 2-hour hunt. A broken aluminum hunting arrow produced a strong signal, and I was happy I remove this dangerously sharp item from the woods. A few aluminum beverage cans, pull tabs, and a random hunk of lead were also unearthed.

I did manage to find 3 coins, all fairly modern ones. A 1941 Lincoln Cent was found in good condition, worth about 18 cents today. I also dug a nice 1964 Roosevelt Dime, the last year that dimes were made with 90% silver content. That silver dime is worth $3 to $4 today. Finally, a modern clad 1993 Lincoln Cent was found. Starting in 1982, Lincoln Cents have been made with 99.2% zinc with thin copper plating. These zinc-based coins don’t fare well in the damp soil, so while it was the newest coin I found today, it was in terrible condition.

No special artifacts or truly old coins were found during this hunt, but it was nice to get out for a hike in the woods regardless. 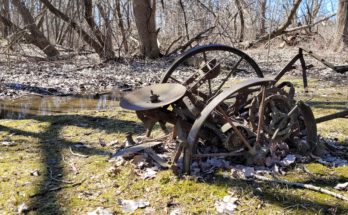