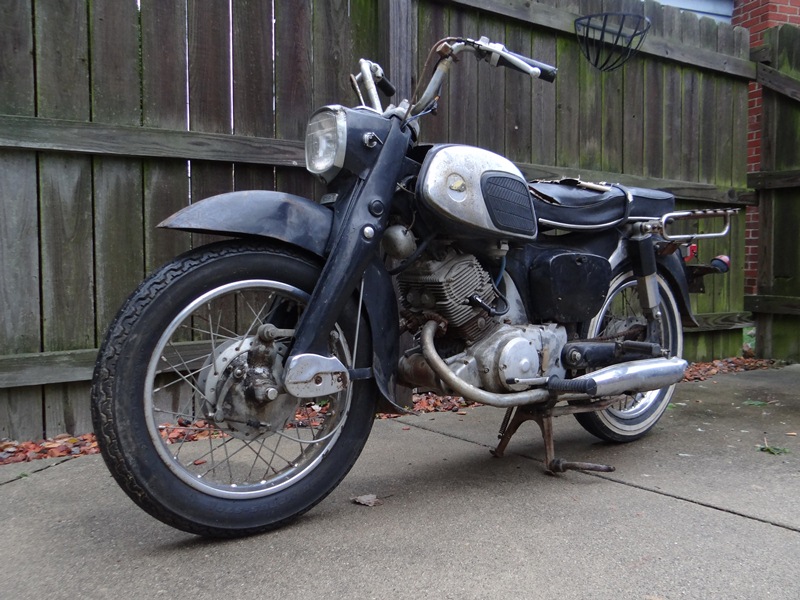 After the ’72 Honda restoration project had completed, I was hooked.  I’ve since put over 300 wonderful miles on that bike, but wanted to restore another old motorcycle.  This time, I wanted something that looked even older.  I also wanted a bigger challenge than the CB175 restoration provided.  I found my challenge with a 1965 Honda CA95 Benly Touring.

This 154cc twin-cylinder bike has the classic styling cues I was looking for.  Large valanced fenders, chrome fuel tank trim, and simple, classic lines.  This model was produced from 1959 through 1966.  The cheesy aftermarket rear luggage rack will not be included in the restoration.  The US-spec CA95 wasn’t built with turn signals, but the Asian and European market C95 was, so I’ll eventually hunt down the proper turn signal pieces to ensure that I have working turn signals on the final product.  I’ve included a picture below of what a restored CA95 should look like.

My plans often change, but at this point, I plan on using this bike down-state once it’s restored.  It would join the ’65 Honda CA102 in that garage.  Two bikes for every garage sounds right, doesn’t it?  (Debbie isn’t allowed to answer that question, I already know her answer.)

This project will take quite a while, perhaps a year, but I’ll post occasional updates.