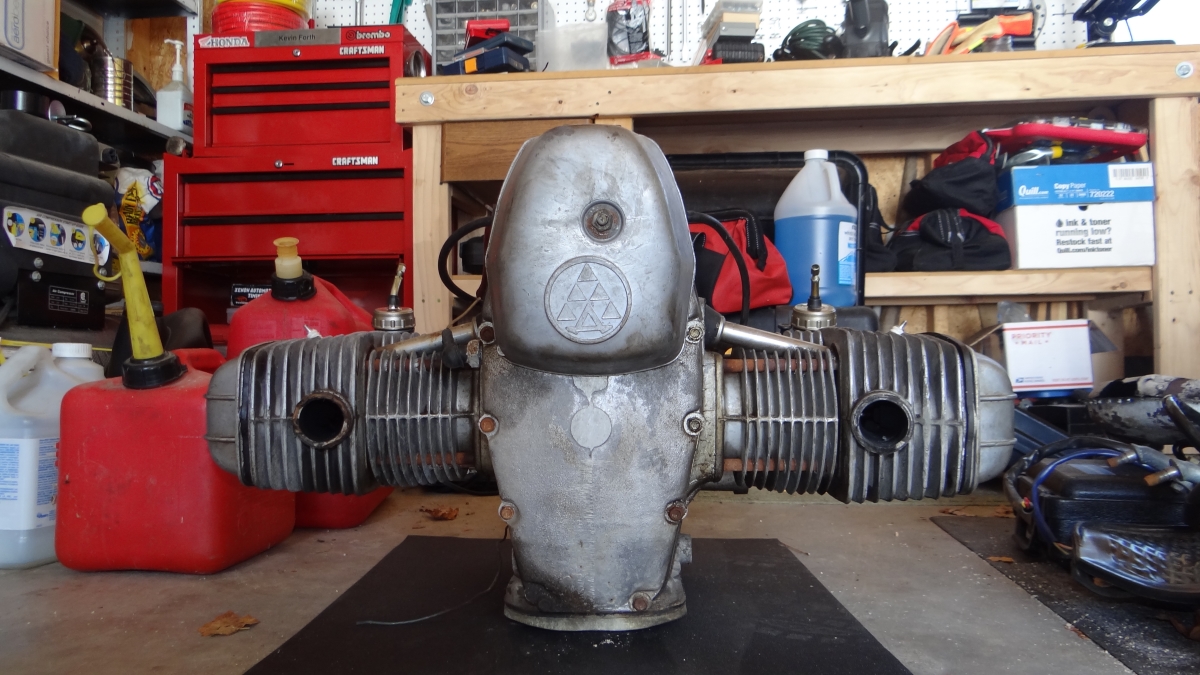 Today Enzo and I took a little hike along the old railroad grade.  It would have been a longer hike were it not for the 6 inches of fresh snow that covered the area.  Enzo’s little legs could only take him so far.  So, we went back to the house but Enzo wanted to stay outdoors in the sunshine.  So, we stayed outside, with Enzo laying on a blanket in the garage where the sunshine kept him warm while I tinkered with the Dnepr.

I hadn’t planned on making much progress with the motorbike this weekend, so I casually snipped a wire here, removed a bolt there.  I thought it might be nice to remove the old handlebar and headlight, both of which are being replaced.  I wanted to see how the new headlight looked, so once the old light was removed, I set the new one in its place.  It looked so much classier than the original, but how would it look with the new fuel tank too?  I fetched the fuel tank and set it on the frame to get a glimpse of how the bike will look with these new items in place.  It amazed me how much lower and less cluttered the bike looked with the new parts.  I took a few pictures before removing the parts again for safe keeping.

Newly motivated, I cut a few more wires, turned a few screws and tugged on a few bolts.  I was sure I did something wrong, because normally my knuckles are bloody at this point in a tear-down, but I hadn’t a scratch on me.  The rusted exhaust came apart without a battle.  The handlebar and cables surrendered quickly, too.  It then only took a few minutes to remove the engine mounting bolts.  I was surprised at how easily I could lift the engine.  I wiggled it free from the driveshaft, turned it 90 degrees in the frame, and pulled it straight out without any drama.  I hadn’t planned on removing the engine this weekend, but it’s free from the frame now.

I’m still waiting for some parts to arrive from overseas.  The new exhaust is somewhere in the Pacific at the moment, while the new black rims and stainless steel spokes are somewhere in the Atlantic.  The leading-link fork is also somewhere between Germany and home.  It won’t take much more work to completely separate the rest of the pieces from the frame.  The next phase will be lacing the wheel hubs onto the new rims with the new spokes.  My wheel trueing and balancing stand is ready.