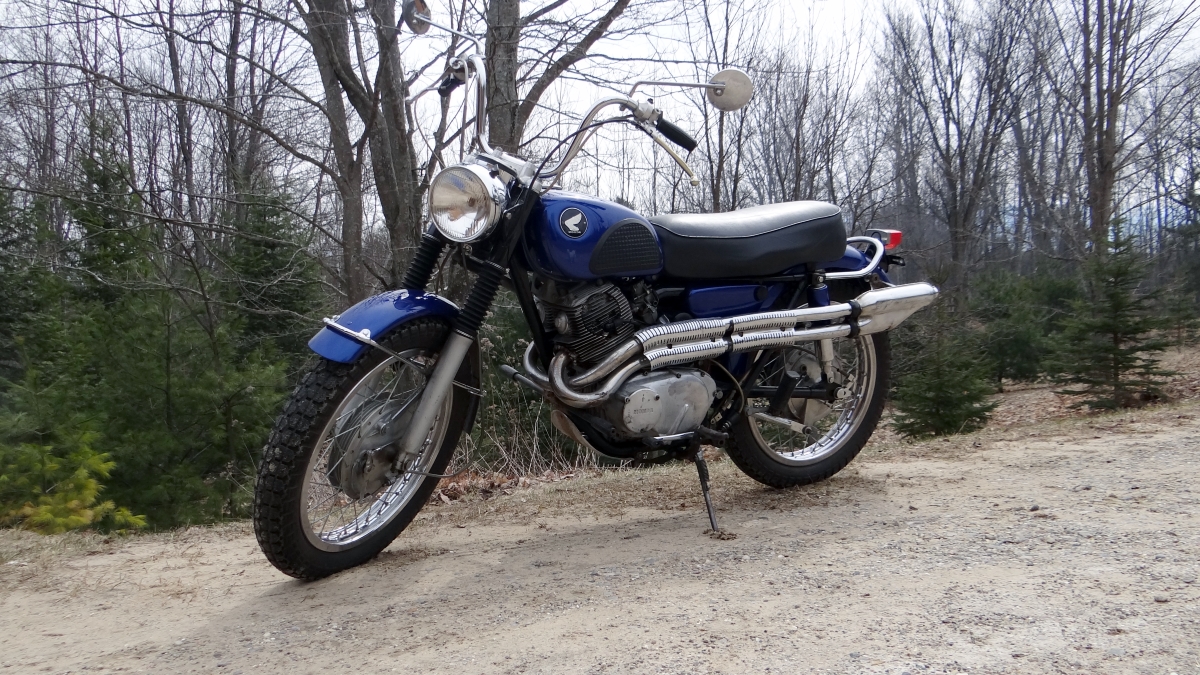 While I’m still working on the Dnepr MT-11 project, patiently waiting for the brass mounting hardware for the side tool boxes that will allow me to move into the wiring phase, my next motorcycle rebuild project unexpectedly landed in my lap.  I wasn’t considering another project, since the current fleet requires periodic maintenance, and that work, while enjoyable, was adding up.  There’s also the physical space needed to house these machines.  Finally, there are repairs pending for several bikes in the tiny fleet, so I had plenty on my plate to keep me occupied.

That said, my neighbor Don decided that I was just the right person to take ownership of his “baby”.  He priced it low, too, after I had initially passed on the offer.  Sure, twist my arm, Don.  Today, the 1966 Honda CL77 Scrambler was rolled into my garage, waiting in line for its turn for a rebuild.

The Honda CL77 Scrambler was a 305 cc twin-cylinder motorcycle made from 1965-1967, although some bikes made in this period were titled with a later model year.  Like most 50+ year old motorcycles, this example has accumulated a fair number of modifications that I’ll need to correct to bring it back to near-original condition.

While the vibrant blue paint is well done and striking, it’s totally wrong for this machine, which came from the factory with a light silver color on the fuel tank, fenders and side covers.  Since the CL77 had at least some light-duty off-road inclinations, I found it rather odd that a previous owner added “highway pegs” to the front, allowing the legs to rest straight forward as with a chopper-style bike.  Likewise, the handlebar is a tall, cruiser-style mini ape-hanger that looks out of place here.  The seat was unprofessionally re-covered at some point and looks like a tall sack of potting soil, so that will go, too.

Some changes I’ll be making will be to improve reliability and durability.  This engine used a twin set of points in the ignition, so I’ve already acquired a nice electronic ignition module to replace it.  Once the ignition timing is set, I’ll never have to touch it again.  Electronic ignitions, with their modern circuitry, require a fairly constant, spike-free voltage level, and this CL77 didn’t come with a voltage regulator.  I’ll install a combination voltage regulator/rectifier that is matched to this model’s alternator.  The original ignition coils will be replaced with high-output coils that will produce 2 to 3 times the voltage at the spark plugs, improving starting and engine performance.

I’ll replace the wheel bearings, but the wheels and spokes are in great condition, and the tires were replaced 2 years ago, so those will stay.  Gaskets and seals will get the usual attention, and because they are cheap, all the cables will be replaced.

Fortunately, I should be able to clean and re-use the exhaust pieces.  That’s good, because as motorcyclists like to say, this exhaust system is made from “unobtanium” and when good pieces do show up online, they get bid into crazy price levels.  While it may be possible to replace the high-rise exhaust with a standard low set of pipes from the CB77, it would obliterate the key feature which defines a Scrambler, so I’ll do everything I can to retain this exhaust.

With travel planned for April and May, and the Dnepr waiting to be completed, I expect to start this CL77 rebuild later in the Summer.  I’ll post the updates here.