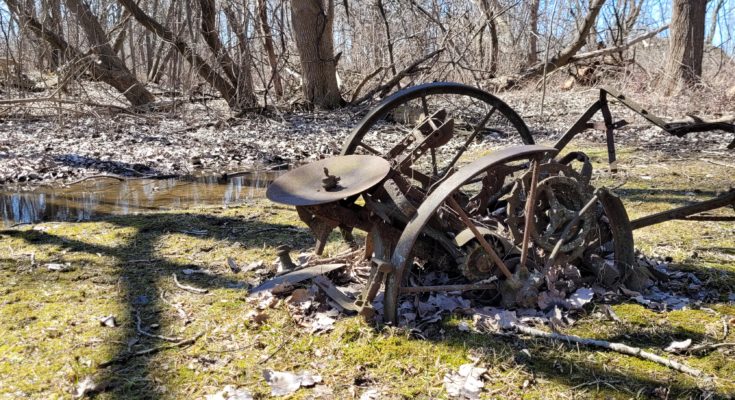 The first day of Spring felt nice, with temperatures in the high 50s and plenty of sunshine. The previous day was cold and rainy, so today felt extra special. This was also an opportunity to get some experience with the new XP Deus 2 metal detector I bought in January. So, I loaded up the Ukrainian-built sidecar and headed off to the far end of the woods, adjacent to the Salt River.

I typically do my detecting a few acres to the east, but the woods were under water and the trails were impassable. The good news was that the grounds near the river, which include several former home sites, were fairly dry. The bad news was that the ground was full of old construction materials and aluminum cans that were simply buried when the home sites were bulldozed years ago.

The only coin I found was a relatively modern clad penny. These coins, being made primarily of zinc, tend to fare very poorly in the soil, so I wasn’t even able to get a date from the coin. Aside from the aluminum cans and bottle caps, I pulled up some copper tubing, which went straight into the recycle bin at home. The most interesting piece of garbage I found was a steel rosette of some sort, with a threaded section behind it. Possibly a plumbing piece? I’m not sure.

While this trip yielded nothing of interest, I did manage to get several hours of experience with the settings of this new machine. I plan on using it in northern Michigan within a week or two, so the experience will help.