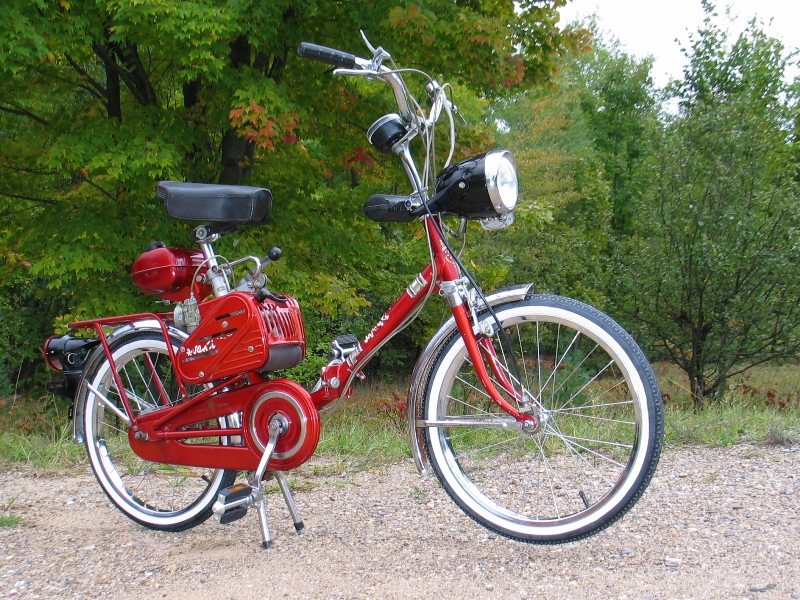 On September 18, 2009, I took possession of a classic, circa 1967 Bianchi moped.  (My sincerest thanks go out to Ted Vosburgh for his generosity.)  After only 3 busy weekends of work, the moped was running and looks great.

I’m still researching this beauty, which seems to be quite uncommon.  It has a folding frame design, making it somewhat portable, although it’s quite heavy.  In its September 15, 1967 edition, Time Magazine published the following:

MINI MOTORBIKES.   Lightweight (60 to 90 Ibs.) vehicles that fold up to suitcase size in a matter of seconds, the little two-wheelers can be stuffed into the trunk of a car, stashed behind the back seat of a private plane or carried in the stern of a launch.
Some half a dozen models are already on the market.  Typical is the Avanti Sport, made by Italy’s Bianchi Velo Co. and now available in most big cities. It is powered by a 1.5-h.p. engine capable of 30 m.p.h. and 125 miles per gal., costs about $250. The Avanti and other mini motorbikes appeal particularly to campers (Soprano Patrice Munsel owns two) and boatmen who need portable local transportation.

The pictures below tell the story, from the day I picked it up in Fenton, MI to the day I took it for its first post-rebuild ride.

The tear-down and cleaning began on September 18 with the engine covers and rear fender and luggage rack.  The rear fender has some pitted chrome, but nothing serious, and no rust-through.  I was pleased with the way the chrome shined once it was cleaned.  The engine covers cleaned nicely, and the paint is in great condition.  The decals have flaked away in some places, but again nothing serious.  The original screws that held the taillight lens on were quite rusted and were replaced with stainless steel screws of identical dimensions.

The work then shifted to the tires and rims.  The original 20″ tires were inflexible and cracking.  I also noticed that the spokes were quite brittle, and one was broken, so I removed the spokes so that I could save the axles and hubs.  I replaced the rims, along with the spokes, tires and tubes.  The frame’s head badge decal was missing, so I acquired a replacement from a private seller in Italy.

The engine cleaned up nicely.  It had excellent compression, and the Dellorto carburetor was in good condition.  I rebuilt the carburetor, cleaning the sediment from the float bowl and fuel screen.  The jet had some residue inside, too, so the carburetor rebuild took care of that.

On September 20, I cleaned and rebuilt both the front and rear axles, including the rear drum brake.  The front axle had some signs of wear in one bearing race, but some high-speed polishing took care of that.  The front ball bearings were in great shape, with no visible pitting.  The rear axle had many more parts, as you can see in the picture above.  One set of ball bearings was for the rear axle itself, and a second smaller set of ball bearings was for the ratcheting chain sprocket.  The drum brake was in excellent shape, with a nice smooth drum surface and lots of material on the brake shoes.  The rear axle and drum brake took about 40 minutes to reassemble.  Both axles roll nicely.

On September 26, I removed the engine magneto flywheel and the points, stator coil and condenser to access the outboard engine bearings.  The roller bearings were in excellent shape, as was the seal,  which I did not replace.  I removed the old grease from the bearing, race and seal and applied new grease before reassembling.  The ignition components were reassembled.  I also opened the crankcase for inspection, revealing the ‘Bianchi’ name on the piston connecting rod, reaffirming that this was likely a proprietary Bianchi engine, not a Motori Franco Morini engine, which Bianchi sometimes used.  This means that replacement parts for the engine would be almost impossible to find.  I cleaned the crankcase, lightly lubricated the connecting rod and resealed the crankcase.  The engine was then ready for mounting on the bike frame.

Reassembly started on October 3.  One challenge was to correct some wiring issues with the magneto, which had some damaged and missing wiring.  Once I drew a schematic diagram of the engine wiring and the frame’s wiring harness, the corrections became apparent.  When I had the engine producing a strong spark, I filled the fuel tank.  The engine roared to life at 8:34 PM on Sunday, October 4, 2009.

I’ve taken the little Bianchi on short rides in 2009 and 2010, adding roughly 60 miles to the odometer.  It’s a nice little machine that looks like nothing else on the road.