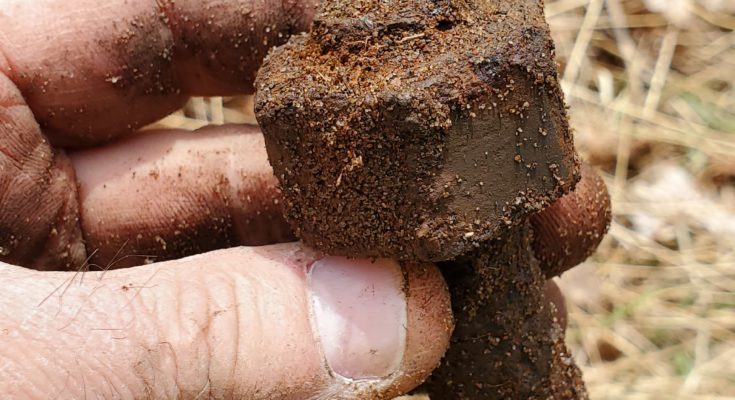 After waiting nearly 3 weeks for the Coronavirus-delayed delivery of my metal detector, I set out today for my first dig. I wasn’t expecting much, but needed to get some experience with the device and its various settings. I’ve read that it helps to hunt in locations where people actually once existed. My street in northern Michigan was created in the mid 1970s. There were no Revolutionary War battles here. No Civil War relics are to be found either. Regardless, an old railroad bed borders the edge of the property, so I thought I’d get some practice there.

Old railroad beds are not easy to dig. This one was made of heavily-compacted rocks which made digging a challenge. I expected that I would find a few railroad spikes, and I did manage to locate some large bolts that were cut through, presumably when the tracks were removed. I then shifted my attention to a location about 9 miles away where an old house once stood. The house was torn down about 15 years ago, but I thought it would be interesting to hunt.

As expected, much of the site revealed construction-related junk. Some holes had broken glass, so I took any debris I found with me. It’s metal detecting etiquette to take the junk. There was an odd ceramic disc with a metal bottom. No idea what that could have been. A pair of bottle caps were retrieved but were too rusted to identify a brand or logo. There was an old square nail. At one point I thought I finally found an old penny. The detector was showing numbers in the copper range, and I saw a round penny-size thing in the dirt. Turned out to be the remains of a fired a shotgun shell. Oh well, It was brass … at least it had some copper in it.

At least I got a few hours of experience, and got outdoors on a nice day. I’ll take the detector back down-state and see what the woods behind the house offers up. My neighbor Randy summed it up when he texted “One man’s trash is sometimes still trash.” Well said.