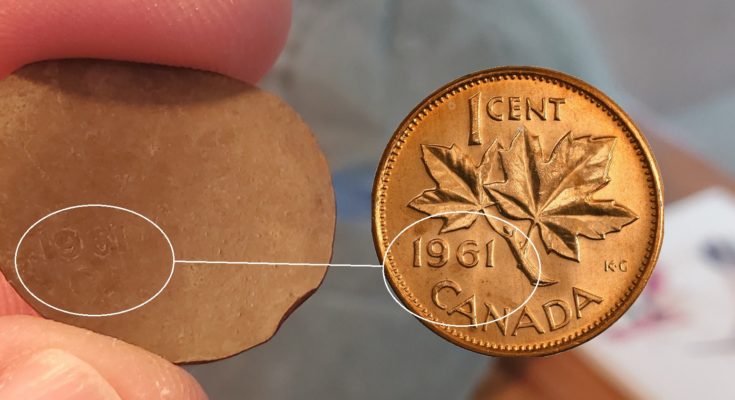 In the midst of a May snow flurry (gotta love Michigan), Enzo and I walked the railroad bed with the metal detector to get outdoors. This was my first real outing with the new Fisher F-Pulse pinpointer, which makes it so much easier to find the exact location of what the metal detector was detecting. The railroad bed yielded its usual old iron bits like pieces of railroad spikes and steel staples. I did manage to dig my first quarter – a 1978 Washington quarter, worth exactly 25 cents. But I did find another relic from the days when the train would rumble past the house across the street.

In the early 2000s, I met a man walking at the edge of the street. He introduced himself, and told me that his wife’s parents used to live at the house across the street from mine. I immediately knew that he was referring to Oscar and Alice Chatel – the couple who developed the street in the mid 1970s. He confirmed that assumption and fondly reminisced about how his wife would place pennies on the railroad track so the passing train would smash them flat.

Today I found one of those pennies – a smashed 1961 Canadian cent. Most of the penny was flattened smooth by the train, but the year and the upper portion of the ‘C’ in Canada are still visible. The penny was likely flattened in the mid to late 1970s since the trains stopped passing by in 1981.

I’ve only been using the metal detector for a few weeks, but this is my most interesting find so far.